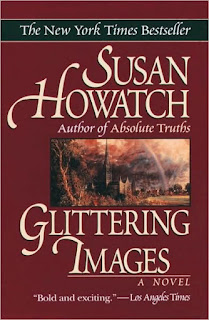 I am re-reading The Glittering Images by Susan Howatch. This piece on the false self/true self won't let me go it is so speaks to the condition of my soul as I recognize more of the false self in me. This work of false/self true self is at the crux of spiritual direction--and is the place I find many conversations around (p.235).

"You're not the villain of this story, Charles," said Darrow [the spiritual director].  "You're the victim. It's the glittering image [false self] who should be locked up in jail."
There was a long silence while I struggled to adjust to this new perspective on my identity, but eventually Darrow added: "I'm beginning to feel very, very sorry for this true self of yours.  Terrible things happen to him but no one knows because he's not allowed to talk about them.  He's cut off, isolated by that ruthless jailer [the false self].  He only ever escapes when the jailer has had too much to drink and then he's always so aggressive that he seems thoroughly beyond [the boundary line], but no wonder he's so angry! He's been imprisoned on a false charge by a jailer who should himself by behind bars.  Tell me, can you really feel no sympathy for him in his predicament?"
...
"Yes, but what would my sympathy do?"

"All the good in the world because if you regard him with sympathy instead of horror then a different image will begin to appear in the mirror.  Love and compassion breed understanding and forgiveness, and once a man's understood himself sufficiently to forgive himself for his mistakes, the unfitness is made whole, the unworthiness is redeemed...We want to restore your belief in your own worth so that you can find the courage to set aside the glittering image and triumph over this tyrant who's tormented you for so long."